The Xbox app for Windows 10 received its monthly update today with a host of new features for standalone PC gamers and those who own an Xbox One.

The select feature for the update this time around is a new Game Clips section that allows users to view and download the clips they’ve recorded on their Xbox One with the console’s Game DVR feature. Besides, users can also view a stream of clips which are popular all over the world, so that they can check out other people’s funny antics. In a future update, Windows 10 will add Game DVR features that will allow users to record any game on their PC.

The social features of the Xbox app have received an upgrade, with support for liking posts on the app’s activity feed, as well as removing your posts from your PC. The search box at the top of the Friends list section now allows users to search both by gamertag and their friends’ real names, if they choose to share them.

Finally, the app now allows PC users to connect their computer to their Xbox One to remotely control their console using a virtual game controller on the PC. Once logged in, users can access OneGuide and the Universal Remote Control that will allow them to change channels, adjust the volume, and even access the DVR on a connected set-top box.

There will be even more changes coming to the app next month. In an interview with GDC, Xbox Group Program Manager Richard Irving told GeekWire that Microsoft will continue to release monthly updates from now on.

Here’s a video rundown of all of Microsoft’s Larry “Major Nelson” Hryb updates:

The Xbox app on Windows 10 is part of Microsoft’s strategy to provide users with a good gaming experience on the platform. And luckily, the app has just received a major update.

Returning to the announcement event in January, Xbox director Phil Spencer made a big deal out of the Xbox app which is now featured on Windows 10. With it, users will eventually be able to stream their Xbox One games directly. on their PC as well as save the game. PC game clips and share them with the community. 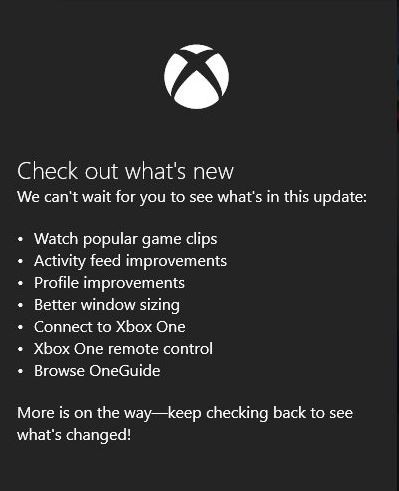 Unfortunately, the app hasn’t received many updates since then, but today’s new version contains some big additions. The first thing that users may notice are some new buttons in the sidebar: Achievements, Alerts, Game DVR, and a Connect to Xbox button are all new.

The app can now be used in place of Smartglass with all of these features built in and users can now log into their consoles. Support for OneGuide has also been added along with the ability to stream and download community clips through the Game DVR option.

The app should update automatically, but if that doesn’t work or you can’t wait, you can go to the Beta Store, the gray icon in Windows 10, search for Xbox, and install the app – this will overwrite your current installation with the latest version.

Of course, console-to-PC game streaming isn’t here yet, but the latest improvements show that the app is heading in that direction. Hopefully the feature will appear as soon as possible.

Download the Xbox app here | Thanks for the tip Romain!